I am absolutely fed up with finding great piles of horseshit on the roads, footpaths, and parks of my local neighbourhood. I have a willing assistant in this task, my favourite doggy, Harry who is only 6 months old and regards the aforesaid commodity as an exceptional delicacy. Many a time I have been dragged into the road narrowly avoiding a pile up, all been required to chase him in circles around the steaming heap of poo, in vain attempts to prevent him feasting upon it. 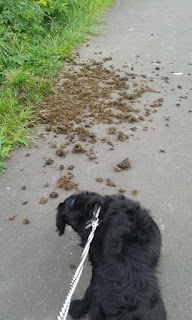 As a dog owner I rage at the injustice that while I am personally liable for clearing up canine deposits, with the threat of a fixed penalty fine or even a court appearance if I fail to do so, yet horse owners and riders can, and do, leave immense mounds of equine excrement in public places without fear of reprisal. In my own neighborhood I know by observation love among the offenders are the mounted section of Lancashire Constabulary. I demand that something is done about it. I have already written to the mare but have received no reply.
I would like to see the current general election campaign fought upon this single issue. It should be not the brexit election but the horseshit election. My vote will go for any party or candidate who makes a manifesto commitment to the legal equality of dogs and horses and their owners. I hope the others will all lose their deposits, but not in our streets. If only they were to promise legislation requiring horse riders to dismount and clear up on pain of prosecution. Motions need to be passed in the House of Commons to this effect. No filly busters should be permitted. While I understand that the greens are taking some careful steps in this territory, and that they regard horse manure as prime material for recycling in municipal allotments, as yet their policy is not strong enough to win my vote. I trust that other electors in this constituency will continue to kick up a stink until this problem is solved.