The Giant's Cause Way and the Paisley Passing

Last week I was in for the first time since 1989. I was in . I was there for three days for a European academic conference on the sociology of religion in the public realm, where I learned more about orthodox soup kitchens in , Bible translations in Bosnian and Muslim organisations in than about the ethno-religious divisions of the host city.  We followed this with a family holiday in the breathtakingly beautiful Antrim Coast and glens, drenched in a week of almost unbroken September sunshine. We took in a boat trip to Rathlin Island, the waterfalls of Glenarriff Forest, a couple of trips back south to take in the Titanic visitor centre, and Mountstewart Gardens, and couldn't miss the precarious Carrick a Rede rope bridge and the obligatory trip to the Giant's Causeway. We were a ten hour car and boat journey away from Liverpool, but could see Scotland in the shape of Islay and the Mull of Kintrye less than 20 miles across the water. Then on Friday, about 16 years since the Good Friday agreement, and a week before the referendum on Scottish independence we heard of the death of one of Unionism's most prominent voices, Rev, Dr Ian Paisley.

As an English outsider I am reluctant to pontificate about a society of which I know so little and where  @pontifex is not universally popular. But I will hazard a few observations.  Firstly it is obvious that over 25 years , or at least the city centre has greatly changed for the better. Armed troops in battledress no longer patrol the city streets, and high security in most places (other than police stations and courts) is noticeable by its absence. The city centre and its waterside in particular shows all the typical signs of urban regeneration. A city airport, shopping malls with all the global brands, music venues, arts centres and back street galleries, cafes and wine bars, new hotels and gentrified apartment blocks. Dockside museum developments in this case a shrine to the Titanic in shiny stainless steel, competing with similar sites in , and Silvertown's Royal Docks. Tourists in plenty from all across the world and a surprising new variety of languages and ethnic groups among local residents. Similar signs of life and hope were found on the Antrim coast.  Polish voices among the fishermen casting their lines into the bay, and an iconography where pink (rather than orange or green) was the predominant colour, with flags, painted bicycles, cars and donkeys marking the recent early stages of the Giro d'Italia.

There is of course another side to the story. There is tension reported in the power sharing government. Communities and schools are still highly segregated into Loyalist and Nationalist enclaves. A drive into along the in Loyalist East Belfast, shows all the signs of continuing urban deprivation, and bristles with flags and murals. Union Jacks, the red hand of , and the banner of the UVF still fly proudly declaring loyalty to the crown and the . It was near here that built his  Martyrs Memorial Free Presbyterian mega church. I was told by one friend who grew up there in the 1960s how the acquisition of the site robbed her and her classmates of one of their few adventure play spaces. We didn't have time or reason to visit Nationalist West Belfast but from what I can make out the communities there are a green hued mirror image of orange East Belfast. We don't hear that much about it in the media but it looks to me as if the peace dividend has mostly benefited the rich elites and the middle class, while poorer working class communities are divided in their struggles for resources such as work, housing and education. It reminds me of similar divided communities in the North of England where poor Pakistani heritage Muslims and working class white Lancastrians lead parallel lives in adjoining economically struggling neighbourhoods.

Religion in is all too evident. There are churches in abundance both Roman Catholic and of numerous Protestant denominations. While there are signs of secularisation and declining numbers in congregations you can't help noticing that on Sunday morning church car parks across the province are full, and the language of faith is everywhere, and there are numerous Christian bookshops. It seems a conservative form of Christianity, I twice noticed pro life groups campaigning around  Northern Ireland's restrictive abortion laws..   Colleagues in the Evangelical Alliance in Northern Ireland have long been engaged in the politics of the peace process and often speak of the need to distinguish Biblical Christian Faith and discipleship from the Protestant Loyalist culture in which they move. Religion, communal identity and politics are closely intertwined, as the career of the late Ian Paisley illustrates. The rabble rousing fundamentalist preacher of the 1970s exacerbated the troubles with his call to "No Surrender" on the . Yet  in more recent times he became an elder statesman  of the peace settlement and a personal friend of Sinn Fein's Martin McGuinness. There must be hope in this, both that the grace of God can soften the hearts of the most intransigent characters, but also that the political process which recognizes the role of faith can bring about positive change, that violence cannot.

I'm wondering then what the experience of has to say about politics today. It's interesting that after a century of struggle to keep the six counties within the union that the greatest progress has been made under a regime of significantly devolved local power sharing. As said to McGuinness, "We don't need to solve our problems, we can sort it out ourselves". In a similar way the Scottish claim for independence is the same script writ large. The tired arguments of the "Better Together" campaign seem to major on the economic risks, and in doing so one can't help suspect that they are advanced not in the interests of local people, but in those of global capitalism and the political elites. If I lived in I would have to vote "yes". But whatever the result next week it is going to be messy and new political processes and negotiations will be lively for many months if not years. In the end is no longer the question but it becomes more about the nature of a participatory democracy that might free the regions and local communities across the from the discredited rule of parliaments.  If we in the North of England are not able to ask an independent to annex us and move the border down to the M62 then at least we can hope for some stronger powers at the local or regional level.

This of course is the notion of subsidiarity, which derives from Catholic social teaching, and suggests that decisions are best taken at the smallest possible level. In theory it is the basis of collaboration in federal systems, and even if rather ironically of the European Union itself. But a more radical Christian tradition in the Anabaptist style might take the argument a step further. If as we believe Christ alone is Lord, the problem in the United Kingdom of Great Britain and Northern Ireland is not so much that it is united or not (with or without one of its constituent tribes) but that it is a Kingdom and that it aspires to be Great. Therein is the language and ideology of dominance and control, rather than the Jesus ethic of shalom and forgiveness and the sin of pride rather than the virtue of humility. Political leadership as even Ian Paisley came to realise in some measure by the end of his life is about servanthood, peace and justice, which starts small as a mustard seed, and then as the honeycomb like steps of the Giant's Causeway reaches out across the seas..

He will not cry out or raise His voice,
Nor make His voice heard in the street.

A bruised reed He will not break
And a dimly burning wick He will not extinguish;
He will faithfully bring forth justice.

He will not be disheartened or crushed
Until He has established justice in the earth;
And the coastlands will wait expectantly for His law." 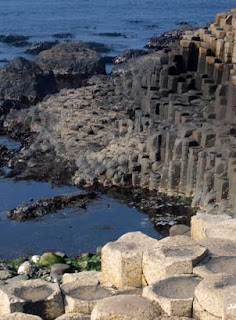