My new blog for William Temple Foundation
http://williamtemplefoundation.org.uk/environmental-sin-plastic-upstream-stewardship-christian/
Posted by Greg Smith (TL) at 11:35 No comments:


God in Public: How the Bible Speaks Truth to Power Today

A review by Greg Smith

Make no mistake I'm a fan of N.T. (Tom) Wright. I love his biblical exegesis, his emphases on the "big story" of the Bible, the centrality of the resurrection, the multiple layers of the atonement and his account of the coming new creation. I'm encouraged by his teaching about heaven touching earth  and value greatly his reconciliation of the gospels of the kingdom with Pauline theology. Books like "Surprised by Hope" have refreshed and sustained me in my work in developing Christian social action and community involvement with churches and communities in urban areas. I've listened to his  podcasts and watched youtube videos of his lectures, and I was eagerly anticipating the publication of his new title, "God in Public ; How the Bible Speaks Truth to Power Today "

Undoubtedly there is good stuff in this book and I find myself agreeing with a lot of what he says. I share some of his political concerns about the quality and hollowness of some of the leaders and politics of the present time, and the horrendous consequences of the deceit and self interest that led Western powers to intervene in in 2003. I can go along with his critique of the world views of both modernity and post-modernity, and his attack on spiritualities that owe more to the Gnostic than the Christian tradition, as set out in the second chapter. I agree that the grand narrative of the Bible gives a much sounder foundation for both personal and social life. However, I do think we need to take more seriously the hermeneutical questions raised by post-modernity - there is no neutral objective reading of Scripture possible and a white male scholar's reading is not the only or necessarily the best way to approach the Bible.

The third chapter, where Tom Wright delves into John's account of the trial before Pilate is the highlight of the book.  It is good to see him looking at John's gospel, which is relatively absent from his earlier books. Without dismissing the traditional evangelical accounts of the crucifixion and the atonement altogether, he brings out the reality of the politics of the events, and the radical challenge to the Jewish religious establishment and the Roman state by one who was labelled "King of the Jews".  And this Kingdom which is not FROM this world brings an authority which is profoundly disturbing to Pilate, and all other rulers since - a power which through powerless love overcomes victoriously the powers and principalities of evil itself.

But then why am I disappointed, and why does that disappointment grow as I read on to the end of the book? The first problem seems to be repetition; inevitable perhaps as the chapters are based on scripts of various talks and lectures given to disparate audiences over recent years, all loosely linked with the theme of God and public life. One can understand that a lecturer needs to summarise and recapitulate key themes from an earlier vast corpus of theological scholarship. But by the end of the book I had concluded that this volume was mostly the product of the Tom/ N.T Wright instant  publishing industry.  I was becoming nostalgic for the quill pens of the monastic scribes of the medieval monasteries, and wondering if the invention of MS Word and the easy techniques of cut and paste actually represent progress in the development of original new thought.

More fundamentally however, I fear that in this volume at least Tom Wright is just not engaging with those who have been grappling with political and public theology for decades.  There is one mention of Jim Wallis, one of Pope Benedict and one of Bonhoeffer,  and on the back cover there is a commendation from Nick Spencer of Theos, and two Christian members of House of Lords. And that is it - I could find  no reference in the index to liberation theology or other forms of contextual theology, to Catholic social teaching on the common good or to Pope Francis. Political and public theologians of the stature of Walter Brueggemann, Luke Bretherton and  Elaine Graham, and Christian  political scientists like Jonathan Chaplain are missing. I'm not sure we should have expected a reference to that most turbulent of East End priests, the late Ken Leech, who inspired so many of us by his combination of theological erudition and practical example, but it would have been enlightening. Nor are the debates following Habermas, on secularization and post secularity recognized. It leaves the impression that there is nothing more than a bipolar conflict between faith and secularism as competing ideologies, with a little bit of Gnosticism thrown in for individuals exploring spirituality.

Unsurprisingly I was looking for links with the thought and practice of William Temple. Apart from the coincidence of the exposition of John's gospel, there was not much else. is not even in the index. At the very least a discussion of God in public needs to engage with the method of middle axioms, and 's insistence on the need to draw on wisdom and expertise from other disciplines than theology. And if one is not happy with the methods, theology and politics of , or of various contextual theologies, there is always the Reformed tradition  which recognizes plural sovereignities under God in different social and political spheres, as expounded in the philosophy of Dooyeweerd and the politics of Kuyper.

The kind of God in Public that emerges from this book seems to me to be rather too much of an establishment and churchy one. Wright seems to me rather too trapped in the world of the New Testament, and scarcely emerges from a Pauline communitarianism.  Fundamentally he seems to be looking at the church as alternative society, radically providing an alternative welfare system which would gladden the hearts of those who invented the notion of Big Society. David Cameron promoted this for a while, then forgot about it as his austerity policy condemned the third sector to make more bricks without supplies of straw. Wright's almost sectarian view seems rather Anabaptist at least at the local level, but without the radical elements of pacifism, voluntarism and independent local church government that make it attractive (to me at least). The political role for the church seems little more than the voice of bishops in Parliament expressing Godly dissent within the confines and language of the establishment.

So my problem with the book is that it is not really answering the questions I and my colleagues deal with day to day in local faith linked community work, or those that Christian politician friends or broad based Citizens organizers engage with in their roles. I find too little understanding of the complexity of public involvement and partnership in an age where the welfare state is under attack, inequality and destitution grows, and the Third Sector is under resourced . There is little help about the messiness of negotiation, compromise and the pragmatism of achievable political change.  There is little about the nature of a plural and religiously diverse society, and how people of various faiths and none can speak of God in public, and work together for the common good,  finding allies on particular values and campaigns. While Tom Wright may understand and value holistic incarnational Christian mission, he says nothing about where Christians fit in the processes of community development and community politics at the local level. As a result there is the privilege of the prophet but there doesn't seem to be much space for the voice of poor and the marginalized.

So if you want a book that puts into print some of his latest talks and sermons you might want to read this book. However you might get just as much out of documents and podcasts that are available online at http://ntwrightpage.com/  or by searching for videos on Youtube. But if you want a book that helps you to think deeply about the complexity of faithful action in the contemporary world, or to inform your daily practice as a Christian politician, academic or community activist there are plenty of other publications that will deliver more.

40 years in the wilderness? - Personal theological reflections on living with ethno-religious diversity 1975-2015. 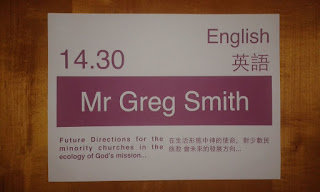 40 years in the wilderness? - Personal theological reflections on living with ethno-religious diversity 1975-2015.


and    The powerpoint presentation
Posted by Greg Smith (TL) at 07:56 No comments: